I was wondering about this Wall Street bailout and how much effect it will have since it was all conjured up during a mercury retrograde? Or does this apply to fixing "old busy-ness", since it had its beginnings some time ago? I read in one of your columns that things would be good/okay until after 2010 or so and after that you wouldn't say or couldn't cause we were headed for a fuzzy future. But I guess were all invested in the "fuzzy futures" market.

I don't think the Mercury retrograde is a big enuff influence to cause this meltdown. However, a few weeks ago, a reader reminded me that I said this in my 2007 Annual Forecast:

"By contrast, in 2008, when Jupiter moves from Sagittarius (where it thrives) into Capricorn (where it's not comfy) things will change drastically. Many corporations could go bankrupt. Growth will slow down. Everyone will tighten their belts and be more conservative."

In one way, we can bemoan the disappearing middle class - but in the next breath, when you think back to previous centuries since 1000 AD - we're pretty well off in North America - although not those in tent cities -- certainly not everyone. But compared to other times, and even some other countries - we are still rich.

But of course, the rich are making a grab for everything they can get.

This means the collective voice of the people on the street will soon rally its forces.... and indeed - we are returning to another transit of Pluto in Capricorn.

Pluto rules countries; and Capricorn rules governments and the status quo. Furthermore, Pluto rules reform and always wants a superior result and Pluto will use even force if necessary to obtain what it wants. (Pluto rules crime.)

Pluto was last in Capricorn from 1762 to 1779. This was the time of the American Revolution and the French (and virtually European) Revolution. (Although Bastille Day did not take place until 1789.)

Once again we have completed the cycle, and are entering a new transit of Pluto in Capricorn from 2008 to 2023.

This means the entire history of Canada and the US was encapsulated in the last Pluto cycle. (Pluto moving from Capricorn through the other 11 signs and back to Capricorn.) The Battle of the Plains of Abraham (whereby Canada came under British Domain) was in 1759, and the US declared its independence from Britain in 1776.

We have come full circle.

I think once again a revolutionary element will pervade the political scene demanding reform. We are already hearing it in the financial community where for example Prime Minister Gordon Brown wants to investigate "irresponsible behavior" - read: greedy money grabs of senior financial people.

We are heading into a new era. 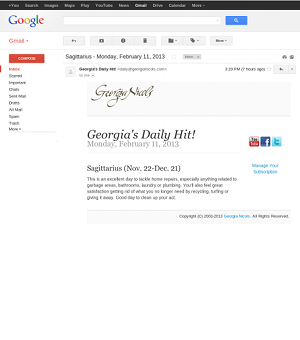 Your Daily Horoscope on the go... Georgia's Daily Hit!