I don't like that you tell people the wrong things. Horescopes don't tell anything at all! It is scientificly proven that horescopes are untrue. I am 13 years old, and even I know that.

If you don't like horoscopes then just don't read them.

You are right. It is true that many scientists say that astrology is foolish bunk. In fact, once a bunch of American scientists all signed a petition about this.

But it is also true that many scientists and mathematicians, and medical doctors believe in astrology and have written books about it.

Kepler was such a great astrologer that they named the first college in North American where you can get a degree in astrology after him (Kepler College).

One time Isaac Newton was talking to Edmond Halley (Halley's Comet) and Halley denounced astrology, Newton looked at him and replied, "Sir, I have studied the subject; you have not."

I think you will find that everyone who does not believe in astrology has not studied it.

Before you decide what to believe in or not believe in, it's a good to know about it.

Thank you for writing to me with your strong opinion.

All good things to you 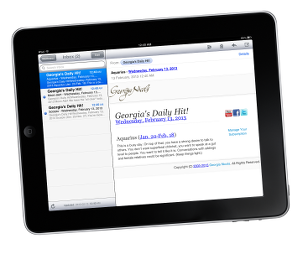 Georgia's Daily Hit! By text, or e-mail to you each morning!